The new challenge of regenerative Medicine: A cell-free therapeutic approach 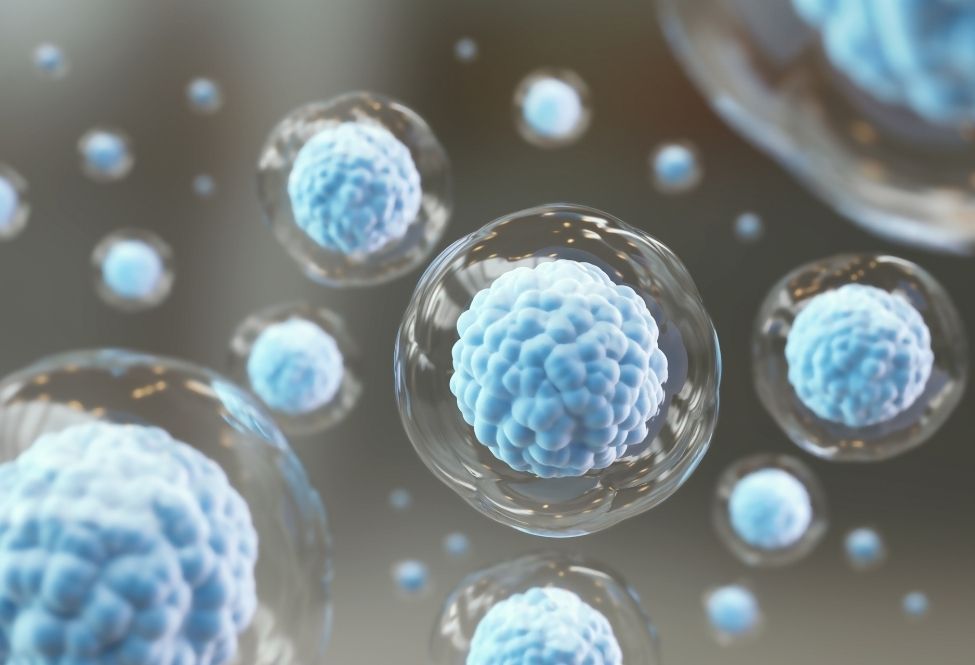 What regenerative medicine tries to do is replace a lesion or diseased organ with stem cells that differentiate to replace the damaged or diseased cells. This method has been used for years now, predominantly in the skin and spinal cord transplants. Recent research shows that transplanted stem cells survive only for a few days. Their therapeutic efficacy is based on the release of a variety of biologically active factors that play an essential role in regulating numerous biological processes. They are clustered in vesicles released by stem cells, which empty their contents into target cells that are specifically recognized.

Regenerative medicine is a therapeutic strategy that is still in development. It aims to repair a lesion or diseased organ with stem cells that differentiate to replace the damaged or diseased cells (definition according to the French research and development institution INSERM – Institut National de la Santé et de la Recherche médicale). Already used for many decades in skin and spinal cord transplants, the so-called cell therapies have been able to benefit from recent scientific advances in the field of stem cells

Mesenchymal stem cells or multipotent mesenchymal stromal cells (MSCs) are the cells most commonly used in experimental treatment protocols for human disease. They belong to a cell population that was first identified in bone marrow but is actually present in all tissues. More than 800 clinical trials using these cells are currently registered.

Paradigm shift in the mode of action of stem cells

It is known that MSCs have multiple simultaneous effects when administered to humans: in particular, they have anti-inflammatory effects, stimulate the repair of damaged tissue, and modify the immune response. However, when MSCs are injected intravenously, they become trapped in the pulmonary capillaries and only a few are able to penetrate to and lodge in the damaged sites. Less than 1% of MSCs survive one week after systemic administration. Despite this major drawback, clinical trials demonstrate the short-term therapeutic benefit of administering MSCs for numerous diseases. This apparent discrepancy can be explained in part by the fact that MSCs promote tissue repair and regeneration through the release of chemical messengers that stimulate host reparative mechanisms rather than directly replacing damaged cells. This paradigm shift is supported by the discovery that MSCs secrete a variety of biologically active proteins. Administration of MSC culture media containing these molecules exerts a similar therapeutic effect as direct injection of MSCs in experimental models of myocardial infarction and pulmonary lesions. A significant advance toward a better understanding of the principle of action of MSCs was the demonstration that the biologically active fraction of culture media conditioned with MSCs was due to particles whose size ranged from 50 to 500 nanometers.

MSCs, like other cells of the organism, secrete extracellular vesicles (EVs). Extracellular vesicles (EV) are attracting increasing interest due to their ability to transfer biological content between cells. EVs released into the extracellular space circulate through various body fluids and modulate the response of cells with which they interact, locally or remotely. EVs shake up the traditional view of intercellular communication and thus represent an alternative and versatile mode of communication that opens new avenues for biological and therapeutic concepts and opportunities.

EVs are involved in numerous physiological and pathological processes. Their capacity for pathophysiological regulation is related to their intravesicular content and the composition of their membrane.

Principle of action of extracellular vesicles secreted by stem cells.

EVs are composed of various vesicular types, including exosomes and microvesicles. Microvesicles are formed by protrusion of the cell membrane, while the smaller exosomes, which are also surrounded by a membrane, are generated intracellularly. These two types of vesicles are released into the intercellular space and circulate in the organism, where they are transported by numerous body fluids.

The EV content consists of enzymes, various metabolites, and nucleic acids such as DNA, and in some cases fragmented DNA or microRNA, which are involved in the regulation of gene expression. This content may vary depending on the cell type in which the EV is produced. It is the transfer of this content into the target cell that alters the behavior and biological activity of the target cell.

EVs have characteristic proteins on their surface that vary depending on the cell of origin and are directly involved in the interaction with the target cell. These membrane proteins enable the recognition of the target cell, the fusion of the EV with the membrane of this cell and its integration.

• They can inhibit the growth of certain tumors.

• Some contain neprilysin, an enzyme that degrades beta-amyloid peptides involved in Alzheimer’s disease, suggesting a benefit in certain neurodegenerative disorders.

• In the intestine, EV showed a protective effect in enterocolitis models.

• They stimulate muscle and bone regeneration and cartilage formation.

• They promote wound healing by stimulating the proliferation of epithelial cells, the formation of new vessels and the synthesis of collagen and elastin.

• And last but not least, they also influence the activity of numerous immune mediators

EVs therefore appear to be the new players in the field of intercellular communication and represent an interesting target for the development of innovative treatment approaches.

The application of EV secreted by MSCs in regenerative medicine offers significant advantages over direct administration of stem cells.

• This can avoid the problems associated with live-cell transplantation, such as immunological compatibility (the use of autologous cells is not required), the formation of tumors and emboli, and the transmission of infections.

• Due to their very small size, EVs can circulate freely in the organism – in contrast to MSCs, which are already almost completely eliminated during their first passage through the capillary bed.

• EVs can be evaluated in terms of their safety, dosage and efficacy in the same way as pharmaceutical products.

• EV can be stored for long periods of time without potentially toxic cryopreservatives for cells and without significant loss of their biological efficacy.

• They can be produced in large quantities on a stem cell basis in bioreactors under fully controlled laboratory conditions. EVs are immediately available for the treatment of acute diseases such as myocardial infarction, stroke or injury-related organ lesions.

• In addition, the biologically derived product could be modified to produce a specific effect in cells for certain therapeutic applications.

The first scientific studies attributed the benefits of stem cell therapies to their ability to be locally transplanted and differentiated for various tissue types. Recent research shows that transplanted stem cells survive only a few days and their therapeutic efficacy is actually based on the release of a variety of biologically active factors that play an essential role in regulating numerous biological processes. These chemical messengers are clustered in vesicles released by stem cells, which empty their contents into target cells that are specifically recognized. The use of these vesicles for treatment purposes offers numerous advantages over the administration of stem cells in terms of production, dosage, efficacy, storage and their immediate availability, since they are ready to use.

← Prev: Cardiovascular diseases Next: "Living with grace" is an art... →