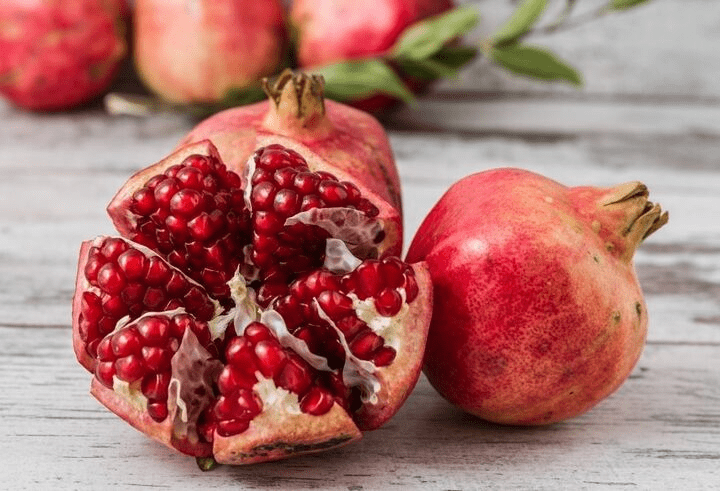 Pomegranate is an excellent antioxidant and its extracts can be used for beauty creams, masks, overall skincare. It’s also available in oil form that also contains antioxidants. Pomegranate contains a molecule that, when digested, is transformed into a new substance that helps fighting ageing. The mentioned molecule is not located in the red seeds, however, but in the shell. That’s why the best way to consume pomegranate would be through its juice. People in the ancient days have also known that pomegranate is really healthy, they’ve even considered it as an elixir of youth.

In recent years, the pomegranate has gained a solid reputation as a ‘superfood’. This exotic red fruit is said to be a real health shield, effective in cleansing the arteries of fatty deposits, and thus protecting us from heart attacks.

In 2016, a team from EPFL and Amazentis published in Nature Medicine the first results of a study confirming the properties of pomegranate to fight the ageing process. Initially carried out on nematode worms and rodents, the results were so spectacular that new tests were undertaken, this time on humans, in several European hospitals. The results of the initial research show that the fruit contains a molecule that, once digested by the bacteria in the intestine, is transformed into a new substance, urolithin A (UA), capable of fighting the effects of ageing. This discovery should not, however, lead you to rush out and eat too many pomegranates. Not all organisms react in the same way. While some have intestinal flora that favour the production of AU, others produce very little, and some are not receptive. Furthermore, the molecule contained in pomegranates is not found in the red seeds, but in the shell. The best way to access its virtues is therefore to drink its juice.

Cosmetic laboratories have not waited for the results of this new research to use pomegranate. In ancient times, it was already considered an elixir of youth that helped regenerate the skin. This is why pomegranate extracts are used in some beauty creams or masks for mature skin, focusing on rehydration and firming of the skin. It is also available as a precious oil in some anti-ageing oils and is promoted for its nourishing and antioxidant properties.

← Prev: The healing power of spices Next: Do you eat organic food? →