Digestive disorders from the age of 50 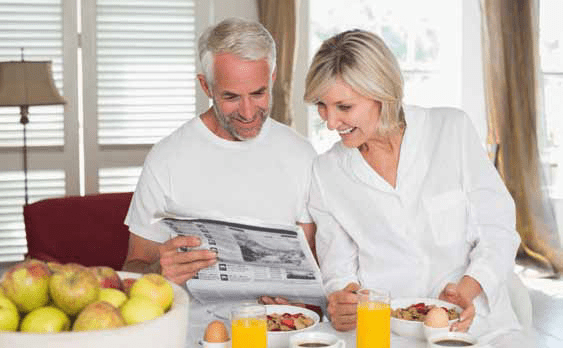 Our digestive system changes with age. Chances of having digestive disorders from the age of 50 increase. Oesophagal, biliary and colonic pathologies are more common to happen as age progresses. We can differentiate various disorders like gastroesophageal reflux disease, lithiasis, constipation, and more. Gastroesophageal reflux disease is the reflux of gastric contents in the oesophagus. It manifests itself as burning in the chest area. There are also complications of biliary diseases. They consist of acute cholecystitis, acute cholangitis, and acute pancreatitis. Constipation is defined as having less than three bowel movements weekly.

To learn more about this, keep reading the article by Prof. Jean-Louis Frossard.

The digestive system (normally silent) can become symptomatic with age. The question of senescence of the digestive system remains debated as the subject remains imperfectly known. However, there is increasing evidence that the oesophageal and anorectal functions are most affected by ageing. Indeed, the frequency of gastro-oesophageal reflux and constipation clearly increases with age, as does biliary lithiasis. Lithiasis is undoubtedly a common problem in our population, with an incidence increasing to almost 10% by the age of 60. The complications associated with it can have a severe impact on the older patient, in whom the diagnosis is often not easy. Indeed, the clinical and biological presentation is often atypical in patients with numerous comorbidities. This explains the high morbidity. This review looks in detail at the following nosological entities: gastro-oesophageal reflux disease, biliary pathology and constipation.

Gastroesophageal reflux disease is the reflux of gastric contents into the oesophagus. Although present at a minimum physiologically in everyone, reflux can become so severe that it manifests itself as a burning sensation in the chest, which is favoured by meals (heavy meals, coffee, tea, etc.) and by leaning forward. Paradoxically, severe reflux can remain completely asymptomatic, demonstrating the excellence of the protective systems that lead to a reduction in the impact of acid on the oesophageal mucosa. However, things are not so simple, as some symptomatic and non-symptomatic patients may develop oesophageal damage (peptic oesophagitis) when chronically exposed to acid. Oesophagal endoscopy may show erosions or even ulcers of the oesophagus. In rare cases of extreme acid exposure, the oesophageal mucosa may be replaced by intestinal mucosa (Barrett’s oesophagus), which is the site of possible subsequent degeneration. Interestingly, up to 50% of Barrett’s oesophagus is detected in refluxing but asymptomatic patients. At this stage, endoscopy should be combined with biopsies to confirm the benignity of the process and to decide on the nature of the follow-up that will be offered to the patient. The treatment of gastro-oesophageal reflux consists of hygiene and dietary rules (avoidance of heavy meals, avoidance of coffee and tea, increasing the time between meals and bedtime, raising the head of the bed) and the prescription of drugs to suppress gastric acidity.

Lithiasis in the elderly

Gallstone disease is a very common entity, with 10-15% of the population over 65 years of age in Europe and the United States suffering from gallstone disease, with a double prevalence in women. The vast majority of these patients are asymptomatic at diagnosis, with no history of biliary pain or complications (cholecystitis, cholangitis or pancreatitis). A linear increase in the prevalence of lithiasis with age is observed in both sexes. It is important to note that old age is associated with a progression towards the development of symptoms (biliary colic) with a frequency of 1-4% per year. This fact imposes particular attention that the doctor will have for his patient since the morbi-mortality rates increase with age. The therapeutic approach is particularly complicated and risky in an elderly population.

Cholecystitis is related to infection of the vesicular fluid, most often secondary to obstruction of the cystic duct by a gallstone. The clinical picture is one of sudden onset abdominal pain, often with a low-grade fever, usually associated with nausea and vomiting. The epidemiology parallels that of gallstone disease. Treatment consists of emergency or delayed laparoscopic removal of the gallbladder.

Acute cholangitis is a difficult diagnosis in the elderly as the patient is often paucisymptomatic. The criteria of the classic Charcot triad of fever, jaundice and solemn chills are not met in 30% to 40% of cases in the general population and this percentage is even higher in the very elderly, in whom the clinical picture may manifest itself by particular signs such as confusion, hypotension, and acute renal failure. Indeed, in this age group, the presence of a febrile state or abdominal pain is uncommon compared to a younger population. This distinction is also reflected in biology, with often no leukocytosis in the elderly, but more marked cholestasis. This is a life-threatening digestive emergency that requires stone removal as soon as possible in a centre with expertise in biliary catheterisation.

Acute pancreatitis results from the migration of a vesicular stone into the main bile duct. The risk of migration is dependent on the size of the stone, with stones smaller than 5 mm being associated with an increased risk of acute pancreatitis. Clinically, acute pancreatitis is characterised by epigastric pain, often transfixing, associated with an elevation of lipase to more than three times the norm, as amylase is no longer recommended as a diagnostic test by the various consensus conferences. Lipasemia remains elevated in serum for a longer period of time, which is a considerable advantage in elderly patients, who consult at a later stage. The mortality rate associated with acute biliary pancreatitis increases with age as shown by most studies. It is estimated at 8% in severe pancreatitis. Age causes certain structural changes that modify the composition of gallstones, thus explaining a particular predisposition of the elderly population to infectious complications. Most stones are predominantly composed of cholesterol. An American study showed a significant correlation between the presence of bacterial micro-colonies in the pigment matrix of these stones and the severity of the infection. The bacterial groups identified in the lithiasis pigment are represented by E.Coli, Klebsiella and Enterococci. In the case of equivocal clinical or biological findings, echo-endoscopy, which is much less invasive than biliary catheterisation, is the reference diagnostic imaging technique for main biliary tract lithiasis (figure). Magnetic resonance imaging remains less effective than echo-endoscopy for choledocholiths < 5 mm. Therefore, echo-endoscopy can be considered as a first-line procedure, followed by biliary catheterisation with sphincterotomy in the same anaesthetic time if an obstructive stone is identified.

Intestinal transit varies greatly from one individual to another and the very notion of constipation is subject to multiple interpretations and personal habits. Scientifically, constipation is only defined as having fewer than three bowel movements per week. Discomfort and hardness of the stool are minor criteria for the diagnosis of constipation. Questioning the patient is essential as it allows the clinician to check for changes in bowel movements, which are a source of concern for the clinician. Indeed, any progressive change in transit with rarefaction in a patient with previously stable habits should prompt the doctor to recommend a clinical examination, blood tests and, if necessary, a colonoscopy. The purpose of this examination is to check the integrity of the colon and to exclude colonic cancer, a scourge that affects nearly 5,000 people per year in our country. In this respect, it is important to remember that all individuals from the age of 50 should be screened for colorectal cancer by one of the recognised methods for this detection (occult blood in the stools, sigmoidoscopy or colonoscopy). The treatment of constipation is based on dietary changes, including an increased intake of fruit and vegetables. The idea of drinking a lot during the day (> 2 litres), which is widespread in the population, is a health myth: no study has been able to prove the effectiveness of such a lifestyle habit. The prescription of mild laxatives (Plantago oval) will be favoured by the medical profession in the first instance. In the case of resistant constipation, other substances may be considered (irritant laxatives, osmotic laxatives, molecules that increase the secretion of water by the colon cells).

Oesophagal, biliary and colonic pathologies increase in frequency with age. The recurrence of digestive symptoms requires a consultation with the family doctor, whose role will be to reassure the patient at the end of his interrogation. In case of doubt, the family doctor can refer the patient to specialist examinations if necessary.